Lokesh Mosale has a good eye behind the lens. His pictures of wildlife are remarkable for the action they capture. More often than not he captures the drama in the forst. A peacock in flight, an elephant kicking up a dustcloud, a tiger with the kill. He is very humble about his vocation if you talk to him. But does his work behind the lens.

I like many of the pictures he has taken. I am not the only one who likes his photos is clear because I know of two Kannada magazines which have photo-pages of his works.It is fun to just serf across his pages on http://www.lokeshmosale.com.

Here is a little feast. 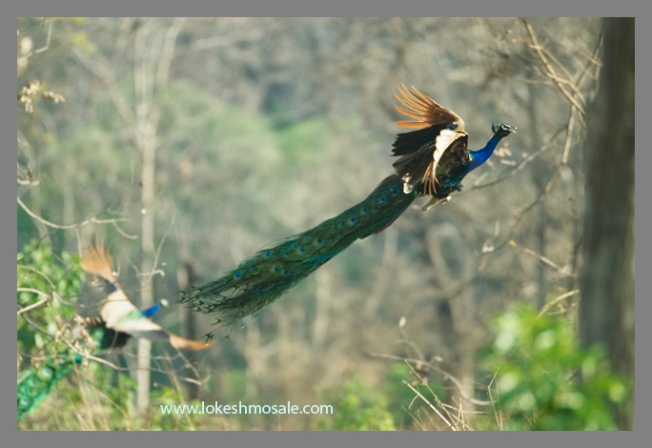 The first one is ‘Tiger with the kill’ from http://www.lokeshmosale.com, a fine site for those who like desktop safari. 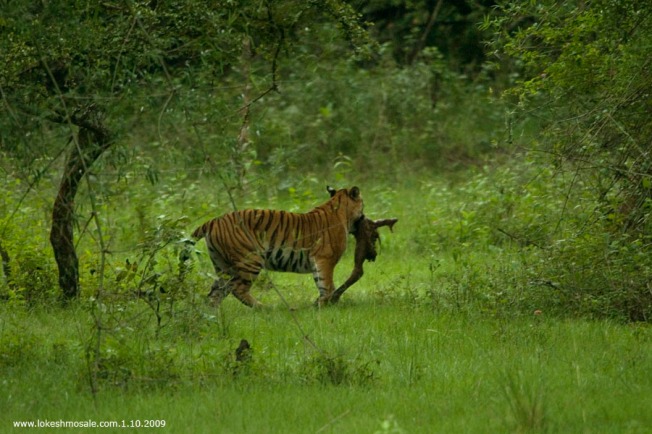 The next is ‘Tigers looking for a kill’ from Sudhir Shivram’s http://www.thejunglelook.com/gallery2/main.php another beautiful place to go to.

Amazing! Another discovery of new species! This time closer homefor me, in Arunachal Pradesh. The Hindu report:

In a significant ornithological discovery, a new bird species, Bugun liocichla, has been identified in Arunachal Pradesh.

Strikingly coloured, its overall plumage has various shades of olive. It has a black cap, a bright yellow patch in front of the eyes, and golden yellow, crimson, black and white patches on the wings. The red-tipped tail feathers are flame coloured on the underside.

Let me confess as an idiot in front of the box I did get glued to Irwin’s shows. But many denounce him for his tricks. People say he gave wrong message to the kids by imposing the human company on the wild animals. PETA have been blunt in saying that he was a cheap TV star. An excerpt:

While fans all over the world have been mourning the tragic death of Steve Irwin, the animal lovers at People for the Ethical Treatment of Animals aren’t shedding even ‘crocodile tears’ for the naturalist.

The animal rights group’s Dan Mathews has slammed the Crocodile  Hunter, saying it’s “no shock at all” that Irwin died the way he did. He also branded the 44-year-old Aussie presenter a “cheap reality TV star”.

“His death is no shock at all. He made his career out of antagonising frightened wild animals. That’s a very dangerous message to send to children,” TMZ.com quoted Mathews as saying.

I know very little about the case. So let me not judge. The case refers to the wildlife resort coming up close to the elephant sanctuary at Bandipur. Mr. T.G. Ramesh, the promoter of the resort claims: “The Wilderness Resorts Private Limited here will create awareness and spread the message of conservation among tourists through programs such as nature treks, bird-watching, wildlife safaris and star-gazing. It will give direct and indirect employment to the locals and thereby help reduce the villagers’ dependency on the forest and make them a partner in wildlife conservation, monitoring and enforcement.”

WPSI Director Belinda Wright says: “A resort in that proximity will cause unrest and imbalance among the wildlife; create dependencies on ground water; affect the ecology; and disturb the home and sex life of the elephants” (quotes from http://timesofindia.indiatimes.com)

How to decide? Why resorts? What about the rights of the animals? Why are all the species a sport to us? Must we see everything? Must we find our entertainment even at the cost of the free life of the animals? Is eco-tourism the right economic alternative to those who live off the forests? How serious are we of conservation? Can’t we leave out that little space earmarked for the animals from our sphere of pleasure?

A new species of animal discovered! Amazing. The following report says this new animal is the never-documented-before tree kangaroo. Though the ‘discovery’ part has a lot to do with for whom it was a discovery and all that stuff about knowledge disciplines blah blah, I was kind of excited about a news that for a change tells us about the existence of an unknown animal rather than the extinct of a known animal. I rejoiced at this. This is an old story, btw, I discovered it recently!

THE DISCOVERY OF this most beautiful of tree-kangaroos was almost accidental. In 1988 I began a survey of Papua New Guinea’s
North Coast Ranges with Lester Seri, Veari Kula and Pavel German. Over the next five years we were to visit every major mountain peak in the region. As early as 1990 I heard stories from hunters in the Torricelli Mountains about a tree-kangaroo known as Weimanke. It was described as being like Goodfellow’s Tree-kangaroo (from photographs in a book), but with a white face. Only the oldest men in a few villages claimed to have seen one, and they only in their early youth. It seemed that whatever Weimanke was, it had been extinct in the region for about 60 years. In 1990 Lester Seri and Pavel German travelled to Mt Sapau, the easternmost high peak in the entire Torricelli Mountains region. Hunters there told Lester and Pavel about an animal they knew as Weiman, which inhabited their forest. Soon after arriving, Lester became seriously ill with malaria and was hardly able to walk. Excited by their discovery, he refused to abort the trip, instead advising Pavel to trek into the mountains with some hunters in pursuit of proof of the animal’s existence. After a week or so, Pavel returned with an extraordinary tree-kangaroo, and the honour of having been the first European ever to see Weiman. The moment I saw the specimen I knew that it was the near-legendary Weimanke of the western Torricelli Mountains. I was also certain that it was a hitherto undiscovered species or subspecies of tree-kangaroo. Its pinkish face, almost sepia eyes, white ears and golden shoulders are highly distinctive. It has white rings on the tail, and parts of the back are a rich, almost burgundy colour. The Golden-mantled Tree-kangaroo is the smallest member of the Goodfellow’s Tree-kangaroo complex. The two specimens known (both female) weighed 7 and 7.1 kilograms. Both were without young when examined. All other aspects of its natural history remain mysterious.

A team of scientists led by Conservation International (CI) found dozens of new species in a survey of New Guinea’s Foja Mountains. The December 2005 trip by a team of U.S., Indonesian, and Australian scientists discovered new species of frogs, butterflies, plants, and an orange-faced honeyeater, the first new bird from the island of New Guinea in more than 60 years.