A few scattered ideas about this v. good novel. I hope to add more thoughts later may be. Had Arundhati Roy not angered the Indian middle class with her uncomfortably sharp pieces in magazines, had she been a goody goody writer writing her uncontaminated literary stuff in her sterilised novels, had she not taken pot shots at the icons of progress and the capital, I guess she would have been much less rejected writer.  What say?

Anyways, about The God of Small Things 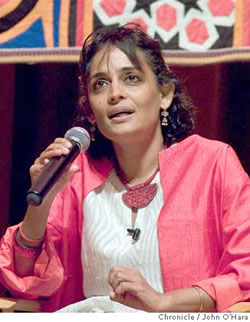 One of the important episodes in The God of Small Things presents a scene of violence. The importance of this is created through a repetition of snatches of the scene throughout the novel. It accumulates through frequent reappearances as a memory, bits of descriptions, a vision, a detail, a small sound and so on, until we are forced by the sheer accumulation of small bits into a shocking recognition of the degree of inhumanity displayed in that scene of violence. The scene is not presented in full detail in one place anywhere in the novel. It is built up as emerging from various bits across the narrative, like an insistent memory, a prickly past.

This scene of violence depicts how the Kottayam police brutalise Velutha at the time of his arrest. At the time he is unarmed (he is not known to be armed anyway), asleep, caught unawares by the police. Yet they attack him and beat him up mortally (he succumbs to injuries the next day). In focusing on this scene I would like to pursue two related questions: the first relates to the number of actors present in this scene of violence. The scene of crime is split between the place of arrest, History House, and the police lock up. The second question relates to gender identity.

During the day, at the end of which Velutha is arrested, Rahel and Estha visit him as they often do. And as part of their play, they put paint on his nails. At the time of arrest and even after, Velutha, thus, has painted nails which prompts one of the police constables to exclaim: “What is this? AC- DC?” (190) The expression AC–DC of course is a derogatory reference to a bisexual. This production of bisexuality in Velutha at the moment of violence on him is entirely sudden. The novel has earlier portrayed him ambivalently in relation to his status in the labour economy. Velutha being a skilled worker has been indispensable for the Paradise Pickles and Preserves factory. Thus as labourer he is at once a dependent (he is unlikely to get a job elsewhere) as well as one on whom the factory depends. In relation to Ammu, he is seen as a receiver of gifts from her though in the past he has been the giver of gifts. These mild suggestions at Velutha’s ambivalent status in a quasi-feudal social setup are extended in the image of Velutha’s bisexuality at the instant of his brutalisation and death.

A similar constituting of Ammu can also be seen in the novel. She is a single parent for the twins and she tells them repeatedly that she is their mother as well as father. In her relation to Rahel and Estha, she alternates between the tough disciplinarian and tender parent. Thus Ammu is also ambivalently portrayed in a combined image of father/mother.

Further, with the twins too, such a portrayal can be seen. The twins see themselves as ‘one’. Rahel laughs at Estha’s funny dream in the midnight. She experiences his sensations. They are seen as a single person with double, dually sexed bodies: “The twins, not rude, not polite, said nothing. They walked home together. He and She. We and Us.” (237)

These elements in the novel that suggest androgynous identity in some of the main characters raise the question of metaphorisation of the victim. In the case of Ammu, then, we can ask if her status as a victim of patriarchy is a metaphor for other kinds of power regimes. Also, whether Velutha is a metaphorical victim of power regimes. It has to be remembered here that in each of these instances in the novel the victimiser is not seen as occupying a singular frame of oppression. The regimes of power are always a combination of different power systems. Hence, Velutha’s and Ammu’s metaphorisation raises the question whether we could admit such a combinatory perspective of the victim. We are familiar with the dangers in seeing every oppression as a metaphor of other oppressions with reference to the use of class as a category of social relation.

Nevertheless, when regimes of power reproduce themselves as social control variously, the subject of power is rendered liminal. Velutha and Ammu in The God of Small Things attest to how the juncture, where the conjunction of regimes of power effects its control at once, is multiply produced – woman also becomes caste marked; dalit also comes to be gendered. Subjectivity of the objects of power is multiply constituted. The risk of metaphorisation of the space of victim need not detain us from attending to the multiply constituted and scripted bodies of the oppressed.

While the oppressive system is not a singular regime, one that operates only as a patriarchy or brahminism but works in collusion to make the victimiser a complex, so is the oppressed a liminal figure, opening up a reductionist metaphorisation. This makes literal the statement ‘oppressed have no gender, no caste, no class’ by which in each scene of domination, the division between the oppressor and the oppressed seem to repeatedly insert the vocabulary of binary. This insertion of binary leads us back to the play of similarities and differences. The danger in an analysis that works with duality, in a minimal articulation, is a serious one. However the same scene in The God of Small Things leads us now to another question: from liminality of identity to the issue of the pitfalls of binary.